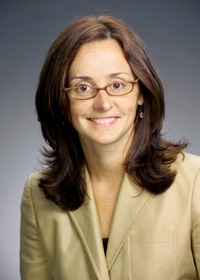 Ms. Dolente’s commitment to women is demonstrated by her roles throughout law school as Co-President of the Women Law Students Association, editor of the Michigan Journal of Gender and Law, organizer of a symposium on marriage law, and teacher of an undergraduate course on Women and Law. Devoted to a planned career in public interest law, Ms. Dolente has worked in public defender offices, on death penalty research, and on the board of an organization providing funding to students pursuing public interest careers. She hopes to work on reform of Michigan’s public defense system, and to continue her mentoring activities with Young Detroit Builders after her graduation in May. 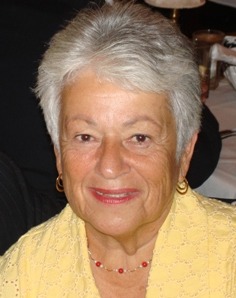 Catherine Dritsas won the Women Lawyers Association of Michigan Foundation (WLAM Foundation) Scholarship in 1997, the first year the scholarships were awarded to women law students. The $500 scholarship that year paid for 1 credit hour of her coursework at the University of Detroit Mercy School of Law. “It is marvelous to see how the [WLAM Foundation Scholarship Program] has grown,” Catherine commented.

Becoming a lawyer after a 31-year career in education, Catherine’s path has been anything but traditional. Nevertheless, for Catherine, the daughter and sister of University of Detroit law alumni and an aunt to 2 nephews who are attorneys, the law “is in her genes.” She went to law school because she felt she needed a new challenge. After law school, Catherine did product liability contract work, insurance defense and family law. Now a solo practitioner focusing on estate planning and family law, Catherine encourages lawyers interested in solo practice to “consider all of the available resources, to network as much as you can, and to reach out to fellow classmates.” She continues to reach out to and mentor other women who go into the field of law, including her former students at the Academy of Sacred Heart. The Academy dedicated its gymnasium in her honor, re-naming it the Catherine Dritsas Gymnasium.

Catherine does not believe in resting on her laurels but rather focuses on what lies ahead. As an athletic director, she was part of an ad hoc group of women who tried to change the athletic seasons for girls’ sports in Michigan in 1972. “They laughed us out of the room.” Last year, she had an opportunity to testify in federal court in a pending Title IX case. This time, she said, the effort was much better funded and coordinated. As a 1993 inductee into the Michigan High School Coaches Hall of Fame, she is excited “to see girls have the opportunity to compete.” In terms of being a strong advocate for women, Catherine paraphrases a favorite quote from Satchel Paige: “Don’t look back . . . something might be gaining on you!”

Listening, truly listening, to what clients need to make them whole is the hallmark of Julianne Pastula’s approach to the law and to life. Julianne, the Women Lawyers Association of Michigan Foundation’s (WLAM Foundation) 2009 Dickinson Wright Women’s Network Scholarship Recipient, defines clients broadly. Her first and most important clients are her family, especially her three children, ages 10, 12 and 15. Her clients also include the citizens of Detroit with whom she meets regularly as a Policy Analyst for the Detroit City Council’s Research and Analysis Division (RAD) and the domestic violence victims that she counsels through her pro bono work with First Step in Western Wayne County. She describes her position at RAD as a gift and her law degree as a tool that equips her to help others.

The Dickinson Wright Women’s Network Scholarship that Julianne received through the WLAM Foundation acknowledged and validated all of the hard work she invested throughout law school. Julianne earned her law degree in 2010 from the University of Detroit Mercy School of Law, where she began her studies after working for a decade as a paralegal. She was a part-time evening student while parenting and working full time. In spite of her family and work commitments, Julianne still found time to fully participate in law school life. She was a member of the Women’s Law Caucus and earned several academic honors and awards. Since graduation, she has continued to successfully maintain the work-life balance that often is elusive all while being an active new member of the bar—she has joined the WLAM-Wayne Region, DMBA, and ABA—and giving back to her community through her work with the PTA and the Jaycees.

“Pay it Forward” is not a phrase that Julianne tosses around lightly. To her, it means that it is incumbent upon her and fellow WLAM Foundation Scholarship recipients to help others, particularly other women. Speaking about the scholarship she received from the WLAM Foundation, Julianne said it was “good to know that the female legal community was so tight-knit.” She found it reassuring that, through the WLAM Foundation, there were opportunities for scholarships, mentoring and building relationships. “Once you reach your goal, these relationships don’t stop.” 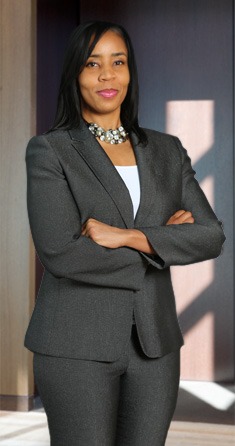 2007 General Motors Scholar Maya Watson is making her mark in the practice of law and in her community. Now a member in Bodman’s Detroit office, Maya’s practice focuses on banking law. She helps her banking clients with negotiating loans, bond and transactional deals, and workout proceedings related to troubled properties.

Given her commitment to her clients, Maya’s commitment to bar association service is outstanding. She is a member of the Leadership Detroit Class XXXIII (2011-2012) and was named Barrister of the Year in 2010 by the Detroit Metropolitan Bar Association. Maya also is the co-chair of the State Bar of Michigan (SBM) Equal Access Initiative and serves on the SBM Justice Initiatives Committee, which supports many justice initiatives that help make available high quality civil legal services to all Michigan citizens. Additionally, she has served as Co-Chair of the Wolverine Bar Association Membership Committee.

In addition to her extensive bar service, Maya is engaged in several civic activities. Most notable was her appointment to serve on Mayor David Bing’s transition team. She has also served on the Board of the Greater Corktown Development Corporation working to enhance economic development activity in one of Detroit’s most historic communities.

The General Motors Scholarship that the Women Lawyers Association of Michigan Foundation awarded made Maya “appreciative that women lawyers are supportive of female law students. It was heartwarming that successful, accomplished women attorneys wanted to see me succeed.” 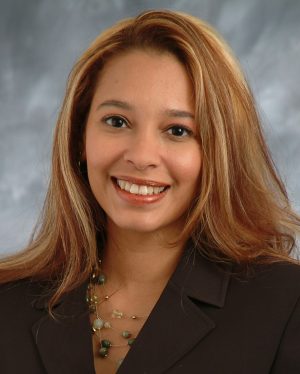 Wearing many different hats—lawyer, mom, board member, business owner, and community leader—is Raquel Salas’ signature. The 2006 Women Lawyers Association of Michigan Foundation (WLAM Foundation) Ford Motor Fund Scholarship winner has taken the Western Michigan legal community by storm since graduating from Michigan State University College of Law in December 2006. After starting her career as an associate at Warner Norcross practicing corporate and family law, she started her own practice four years later. Raquel and her partners acquired another firm, which they rebranded as the Avanti Law Group, because she saw an unaddressed need for affordable legal services and wanted to do her part to fill the void.

Raquel is a testament that one can balance the demands of a law degree with those of being an involved parent and an active voice in the community. Her rapidly expanding practice focuses on assisting small businesses and start-up companies in the areas of family, business, and criminal law, particularly white collar crime cases. She was not expecting the firm to grow so fast—from 3 attorneys in 2010 to 9 attorneys in 2013, with 7 nationalities represented in the office—but she is pleased that the firm was able to accommodate clients’ legal needs while also accommodating the firm’s growth. As a bonus, she enjoys autonomy over her case load, clients, and schedule. Her ten-year-old daughter sometimes accompanies her to work, where her daughter has a laptop in Raquel’s office. Raquel does not hesitate to share the flexibility that she enjoys as a partner with associates and other employees who are welcome to bring their children to work as well, helping all members of the team to accommodate the demands of family and career.

Her advice to other women who are considering starting their own law practice is to remain involved in the community. By being engaged, “people not only know of you, but they know and trust you.” Raquel has certainly heeded her own advice. She joined her first non-profit board only months after law school graduation. She has served on the Boards of Directors of the West Michigan Hispanic Chamber of Commerce and First Tee of West Michigan, and currently is a new Board member at the Sacred Heart of Jesus School. Raquel has many speaking engagements in Grand Rapids and Mexico but most enjoys speaking to students, especially those who are immigrants or non-native English speakers like herself. She lets the students know that “It is easy to get distracted, especially if you do not fit a certain profile, but it is o.k. to be different.” Raquel shares stories of her triumphs telling them that “If you do your work, things will work out. You will see the results.” Raquel has definitely seen the results as her personal and corporate community service initiatives have been widely recognized. In 2012, the Grand Rapids Business Journal named her one of Western Michigan’s 50 Most Influential Women. Community engagement is good for her business as well. Among many honors and awards, her firm has been named as the #1 Women Owned Law Firm by the Grand Rapids Business Journal for the last 2 years as well as the 2012 Hispanic Business of the Year by the Hispanic Chamber of Commerce.

As a business owner, Raquel knows that every dollar counts. She applied that same philosophy to her legal education, financing law school with loans and every scholarship for which she was eligible, including the WLAM Foundation Ford Motor Fund Scholarship. Of the impact that the WLAM Foundation Scholarship has had on her career, Raquel mentioned that the scholarship helped to reduce her student loan debt, which has allowed her the financial freedom to do the work about which she is passionate. 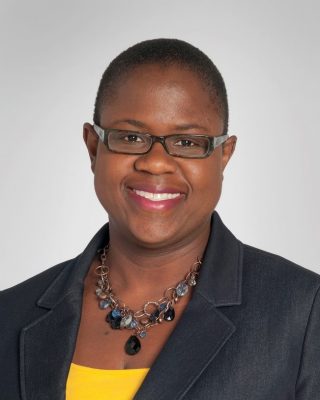 In 1998, when Michelle Johnson Tidjani became one of the first WLAM Foundation scholarship awardees, she was completing her legal education at University of Detroit Mercy School of Law and preparing to launch her career. Since then she has established herself as a preeminent healthcare lawyer. She currently serves as Deputy Chief Legal Officer at the Cleveland Clinic Foundation where she is recognized for her expertise in healthcare reimbursement, reform, antitrust, and regulatory matters.

In addition to her work at Cleveland Clinic, Michelle has served as Senior Counsel for Tenet Healthcare Corporation in Dallas, Texas, as an Assistant Corporation Counsel for Wayne County, and in private practice at Hall Render Killian Heath & Lyman and Smith Haughey Rice & Roegge. Along the way, Michelle has served as an adjunct professor at Grand Valley State University and Siena Heights University and a lecturer for Cleveland State University – John Marshall College of Law, Michigan Association of Homes and Services for the Aged, and the Michigan State Medical Society. Michelle has authored articles on clinical integration and healthcare reform and served as a featured speaker for various organizations including the American Health Lawyers Association and the American Corporate Counsel Association.

Michelle’s leadership is demonstrated not only by her professional achievements, but also by her commitment to promoting diversity in both law and healthcare. Michelle is a member of the Cleveland Clinic Executive Diversity Counsel and a mentor for the Cleveland Clinic Young Business Leaders and the 3Rs program of the Cleveland Metropolitan Bar Association. She has served on the WLAM Foundation board, as the Treasurer for the Women Lawyers Association of Michigan, and as a member of several legal and healthcare associations. In 2014, the Norman S. Minor Bar Association honored Michelle as a Trailblazer.

Although her career has moved her away from Michigan, Michelle continues to support the goals of WLAM Foundation. This spring Michelle responded to WLAM Foundation’s invitation to our Annual Reception not only by traveling back to Michigan, but by filling a table of guests.